St. Giles is Sunday morning’s top story at CBC Hamilton. I spoke with Saira Peesker for her story about the United Church’s proposal to demolish the former St. Giles Presbyterian, a beloved architectural gem in east Hamilton. 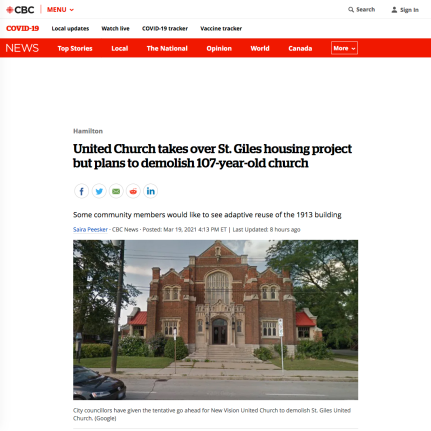 Stewart & Witton’s original 1912 church was altered twice: in the 1940s, the chapel was renamed the St. Giles Memorial Chapel to commemorate the congregation’s war dead, and in the 1950s, it was expanded with a one-storey addition by Bruce Brown & Brisley. Still owned by New Vision United Church, the east Hamilton property was abandoned following a 2014 merger with Centenary United Church.

A 2018 city report found the original St. Giles building and chapel are highly deserving of protection under the Ontario Heritage Act. The volunteers on the city’s heritage committee voted unanimously to designate St. Giles — the church meets 8 of the 9 criteria, when only one is needed for designation. But before councillors could vote on designation, New Vision held a St. Giles contents auction, stripping the interior of many valuable heritage features. As Peesker writes, “at [Rev. Ian] Sloan’s request, Hamilton City Council’s planning committee rejected a heritage designation that would have saved the church.”

Despite many examples worldwide and locally of successful church conversions, such as Waterdown’s St. Thomas Lofts and nearby St. Peter’s Community Centre, New Vision still claims that housing cannot be built without destroying St. Giles.

In February, Shannon Kyles, president of the Hamilton branch of the Architectural Conservancy of Ontario, issued an urgent call for a plan for our historic places of worship, including St. Giles. You can also read my reporting about St. Giles here and my op-ed here.