Going to bat for Old Cathedral

Old Cathedral is front-page news today in The Hamilton Spectator. I spoke with Teviah Moro for his story about the former Cathedral Boys’ School, which is owned by the Diocese of Hamilton.

Designed in 1928 by local architects Hutton & Souter, the neo-Gothic high school building was expanded in 1951 with the addition of the Memorial wing, which commemorates former Cathedral students who died in the two world wars. A publicly funded $500k renovation is being carried out by Good Shepherd, for a temporary homeless shelter in both wings of this historic school.

Despite 30+ years of community effort to designate the building, neither wing is protected by heritage designation.

Although a 2018 city report commissioned from George Robb Architect found the entire building merits protection under the Ontario Heritage Act, Good Shepherd “argued against [heritage] status for the property” and rejects the city’s findings for the Memorial wing. Heritage designation for Old Cathedral was first sought in 1989 and was formally requested 7 years ago by the Stinson Community Association.

The Hamilton Spectator (est. 1846) is published by Metroland Media Group, a division of Torstar. 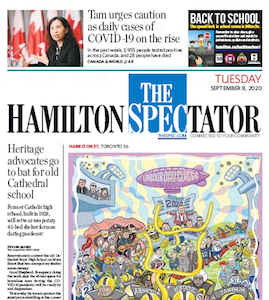